Due to measures put in place because of COVID-19 and the production requirements for this item, it is currently on backorder until staff returns to office. We are currently set to return in limited capacity on June 1, 2020. Production for this item will commence at that time and date.

The First World War touched every small town and every family in Canada but the Bowes family had more than its share of suffering. Before 1917 finished all three of the Bowes brothers, Clifford, Jim and Fred, would perish. Throughout their service Margaret Bowes’ boys wrote home faithfully and she in turn sent letters and parcels. The letters were collected and kept together.

Letters Home—Bowes Brothers Collection tells the story of the brothers during their time in uniform. Clifford is the first to enlist and by far the most prolific of the boys, taken into the 222nd Battalion and sees action with the 44th Battalion. His two younger brothers, Jim and Fred, also enlist and go off to Camp Hughes near Brandon for initial training. It is only “Somewhere in France” that the three boys finally meet up. Though they cannot say where they are, we know they were at Vimy Ridge during the months of planning for the battle which began on April 9, 1917.

The happy reunion ends Feb. 28 when a single grenade explodes among a group of four soldiers, including the two younger Bowes brothers. Jim dies of his wounds that day but Fred is taken to hospital where he eventually succumbs to his wounds.

The letters show that Clifford survived Vimy Ridge, and they continue to place him “Somewhere in France.” He also made it into Belgium, fighting at Passchendaele where the Canadians suffered nearly 16,000 casualties.

Clifford, we learn, was on the front line. Although he was buried near where he fell, his grave was lost in the turmoil of further fighting. Today, Clifford’s name is carved on the Menin Gate in Ypres, Belgium, along with more that 54,000 other Commonwealth soldiers who fought there but have no known grave.

Through these letters we see the strong family bonds, the noble sense of duty and concern not to let those at home worry.

Be the first to review “Letters Home—Bowes Brothers Collection” 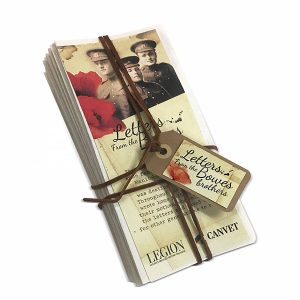