Late in 1943, Canadian troops attacked the German-held Italian city of Ortona. The goal was to push up the eastern coast, then swing inland on a road leading straight to Rome. By the end of the Italian Campaign, more than 92,000 Canadians had played a part. Yet it remains relatively unheralded, overshadowed by the drama of D-Day. To commemorate the sacrifice made in Italy over 75 years ago, Canada’s Ultimate Story has published a special edition publication showing the fierce fighting and how Canada prevailed in Ortona’s labyrinth of death. Read about the day-by-day battles—street by street, house by house, and hand to hand—in THE BATTLE OF ORTONA.

Be the first to review “Battle of Ortona” 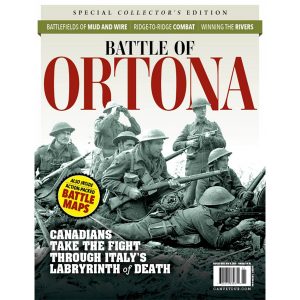