This special edition poster includes an informative timeline of the planning and lead-up to the Allied invasion of Normandy, June 6, 1944 plus detailed battle map, stats and rare images. D-Day is the start of a massive Allied assault on Hitler’s Fortress Europe. In the early hours, Allied paratroopers, including approximately 450 Canadians, jump from aircraft or land in gliders behind German coastal defences. Ships carrying 156,000 soldiers assault the coastal defences. The Canadians take an eight-kilometre stretch of shore code-named Juno Beach, and advance 13 kilometres inland, the farthest Allied incursion of the day. The invasion of Normandy, France, propels the Allies to victory within 11 months.

Be the first to review “Countdown to D-Day Poster” 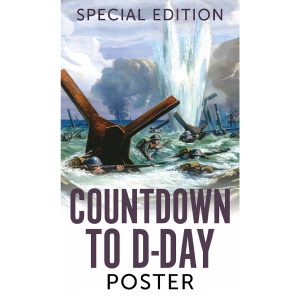