This item is a digital product. When purchased a download-link will be included in your emailed receipt.

D-Day—June 6, 1944—was the start of a massive Allied assault on Hitler’s Fortress Europe on the northwestern coast of France. In the early hours, Allied paratroopers, including approximately 450 Canadians, jumped from aircraft or landed in gliders behind German coastal defences. Thousands of ships carrying more than 150,000 soldiers assaulted the enemy’s pillboxes and strongpoints. The Canadians captured an eight-kilometre stretch of shore code-named Juno Beach and advanced some 11 kilometres inland, the farthest Allied incursion of the day. The invasion of Normandy propelled the Allies to victory.

Over the ensuing years, Legion Magazine published several memoirs and recollections written by those who, one way or another, experienced the largest seaborne invasion in military history. Some were just children, others seasoned soldiers and sailors. What is common throughout is an awareness that something momentous and world-changing was underway.

Be the first to review “D-Day Remembered e-book” 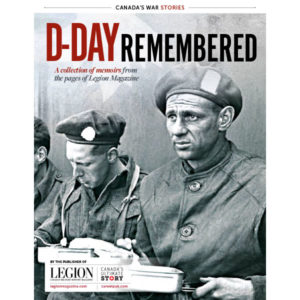