In the fall of 1917, three years into the First World War, the front was a ruined and shattered battlefield of endless craters and mud that trapped both the living and the dead. The Canadian Corps was thrust into this menacing warscape to help Britain, France and Belgium achieve a long-sought goal to destroy the enemy’s will to fight. That did not happen, but the battle of Passchendaele was Canada’s third major victory of 1917.

The Great War had been raging for nearly three years by the time the Canadian Corps stormed and captured Vimy Ridge. Explore why the battle is considered by many historians as a defining moment for our country, detailing the path to victory, the reputation Canadian troops garnered from it, and the importance it still holds today in our national identity.

Once the First World War bogged down in static trench warfare, life on the front was a series of daring trench raids, terrible losses in ill-conceived battles and constant torment from snipers, rats and lice. Yet throughout, the men could somehow find humour in it for themselves. As historian Jonathan F. Vance notes in his introduction, “There is a cliché that old soldiers never like to talk about their wartime experiences–unless it is to other old soldiers. These stories are just that–First World War veterans talking to each other.” 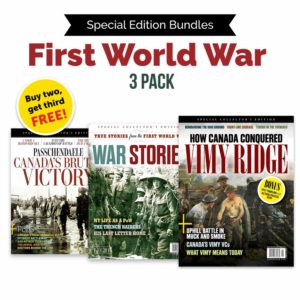