This item is a digital product. When purchased a download-link will be included in your emailed receipt.

The First World War, from 1914 to 1918, had a profound and devastating impact on many nations. More than 17 million combatants and civilians died on all sides. Canada sent 620,000 soldiers, from a population of less than 8 million. More than 60,000 Canadians were killed and almost 173,000 were wounded.

Canada’s critical role in great victories such as Vimy Ridge, Hill 70 and Cambrai helped forge a sense of national pride in the young country. Learn more about Canada’s fascinating WW I history through this exclusive e-book The Great Response.

Be the first to review “The Great Response e-book” 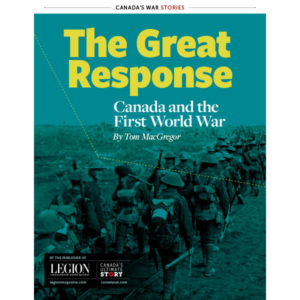