Our January/February 2019 back issue is now available!

Invisible injury
If a soldier’s moral conscience is damaged, the problem and the solution can both be hard to find

Face to face
Is it time to redesign and replace the Canadian Army’s combat uniform?

Bells of peace
At sundown on Nov. 11, communities across Canada remembered the Armistice centenary with 100 tolls

A day of healing
On the 100th anniversary of the end of the First World War, white wreaths evoked Ottawa’s first Armistice Day

O CANADA
The “fightingest” ship in the navy

Be the first to review “January/February 2019 issue” 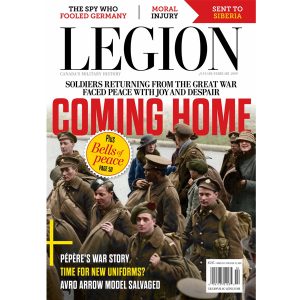