ASSIGNMENT AFGHANISTAN
“They knew there would be bombs buried in the dirt. They knew their metal detectors probably wouldn’t detect the bombs’ wooden pressure plates. They knew that after the bombs…the air would zing with high-velocity metal,” reports Legion Magazine’s Adam Day in his coverage of the war in Afghanistan. Besides his major feature, Day returned with video showing Canadians engaged in a firefight while on patrol. The latter is available on our website—www.legionmagazine.com.

FIGHTER JETS THEN AND NOW
The Canadian government’s multi-billion-dollar plan to purchase new fighter jets prompted us to present a photo essay on some of Canada’s more famous birds of prey—past and present. Along with the photos we provide a few specs, including top speeds for such aircraft as the CF-18 Hornet, CF-100 Canuck and F-86 Sabre.

RAISING EXPECTATIONS
“A very busy apprenticeship and short honeymoon marked Jean-Pierre Blackburn’s first year as minister of Veterans Affairs,” writes Legion Magazine’s Sharon Adams in her profile on the minister. Responding to sharp criticism, including the privacy commissioner’s finding that some members of the department had breached a veteran’s right to privacy, Blackburn has introduced several changes and vowed to make further improvements.

Be the first to review “January/February 2011 Issue” 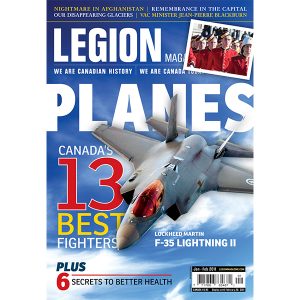