ONE MARTYR DOWN
Legion Magazine Staff Writer Adam Day travels to Southern Lebanon to track the tragic and untold story of a Canadian peacekeeper. Army Major Paeta Hess-von Kruedener was killed in 2006 along with three other United Nations peacekeepers while manning a bunker at Patrol Base Khiam. Our story looks deeply into how the UN bunker came to be blown up, and how that violent act left relatives of the peacekeepers grieving around the world.

SHOULDER TO SHOULDER: DEALING WITH PTSD
Following up on Part 1 of her in depth feature on how operational stress injuries affect Canadian Forces personnel, Staff Writer Sharon Adams looks into a successful program that helps veterans transition between their military experience and civilian life.

WHEN THE BOYS CAME TO TOWN:
During the Second World War, thousands of young men flooded into rural Canada to receive instruction under the British Commonwealth Air Training Plan. We look at how communities entertained these service personnel, and how communities and farms also benefited.

Be the first to review “January/February 2013 Issue” 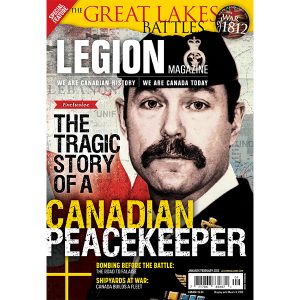