ASSIGNMENT AFGHANISTAN: Why Things Are Seen: A Story of Blunders, Bombs, Broken Teeth and Bad Ideas
With Canada’s mission to Afghanistan winding down, Legion Magazine’s award-winning staff writer Adam Day returned to the wartorn country seeking answers to several questions. Was it a just war? Why does the Canadian public seem so confused on what the purpose was? What was Canada’s strategy in Afghanistan? Day, who has often gone beyond the wire to see what it is like to be a soldier on patrol, also found time to reflect on his personal limits for enduring the war.

FACE TO FACE ON A HISTORIC CONTROVERSY
Did the Canadian government make the right decision in February 1959 to cancel the Avro Arrow project? Two historians, with a great amount of knowledge on the Arrow, argue Face To Face in this long-standing historic debate. Face To Face is a new series for Legion Magazine. Its purpose: To give historians an opportunity to argue controversial topics.

NORMANDY TOUR: Re-discovering the Juno Beach route, a primer for modern, historically-minded travellers who are planning to visit France during the 70th anniversary of the Normandy Campaign.

A MIGHTY BIG STEP: A look at the increasing potential of bionics and exoskeletons.

BRITISH COLUMBIA’S RUGGED RANGERS: A retrospective on the men who helped guard the coast and the province’s interior.

Be the first to review “January/February 2014 Issue” 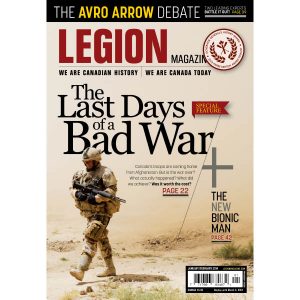