Twin Brothers Face The Dying Hours Of War
Acclaimed writer Don Gillmor’s grandfather shipped out from Winnipeg in February 1918 and arrived in France a month later for his first taste of trench warfare. On Oct. 15, he was struck by two German bullets. His twin brother, in another trench just 50 kilometres away, was hit by a sniper’s shot on Nov. 11. As the Great War came to a close, one would perish, and one would survive.

War After War
Operation Reassurance was Canada’s contribution to a multinational naval patrol on the Black Sea, intended to signal NATO’s resolve in the face of Vladimir Putin’s increasingly aggressive posturing. Staff Writer Adam Day boards the frigate HMCS Toronto to see where we stand with Russia, and to explore how nations can be dragged, reluctantly, into dangerous conflicts.

Operation Keepsake
Thousands of sentimental gifts and handcrafted keepsakes have been sent by family and friends at home to the men and women of the Canadian Armed Forces over the 13-year deployment in Afghanistan. Now many of those items of support are coming home for public display, thanks to the efforts of two passionate collectors.

Legion Urges Government Action On New Veterans Charter
“Our injured veterans and their families cannot wait any longer,” said Tom Eagles, Dominion President of The Royal Canadian Legion, as he launched a new letter-writing campaign urging the federal government to act quickly to implement substantive changes to the New Veterans Charter. “The Legion does not believe the delay is justified.”

Eye on Defence
Canadian CF-18s are flying bombing missions in the Middle East again, this time against Islamic militant targets in Iraq. Supported by 600 personnel, this air campaign is Canada’s fourth in 24 years. Military analyst David J. Bercuson asks: When should these fighter jets be retired, and what should their replacement be?

Should Canada Have Sent Troops To Hong Kong?
In 1941, the British government asked for two Canadian battalions to defend the crown colony, with disastrous results. Should our government have refused the request? Two historians take opposing positions in our popular Face-To-Face series.

Be the first to review “January/February 2015 Issue” 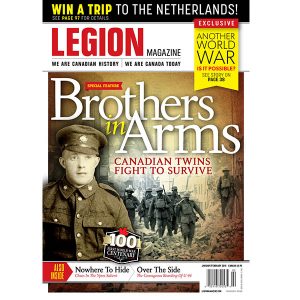