Rescue on the coast of Newfoundland:
Visit www.legionmagazine.com/coldcomfort

In February 1942, two U.S. ships ran aground on Newfoundland’s rugged Burin Peninsula during a brutal winter storm. Death certainly awaited all on board if local miners and fishermen hadn’t faced the elements to make a daring rescue.

If Day:
For one day during the Second World War, Manitoba lay under siege by “German” invaders. Politicians were arrested and books burned as civilians realized the consequences of a German occupation. It was all an enactment to encourage locals to buy Victory bonds.

Veterans and suicide:
How many veterans kill themselves? The answer is we don’t know. Writer Don Gillmor looks at suicide among those who have served in the military and the many questions left unanswered.

Face to Face:
Was john Diefenbaker’s decision to deny U.S. nuclear weapons on Canadian soil a good one? Two historians debate the issue.

In order to save about 1,200 Jews from certain death, German industrialist Oskar Schindler feigned friendship with Nazi butcher Amon Goth.

Be the first to review “January/February 2017 Issue” 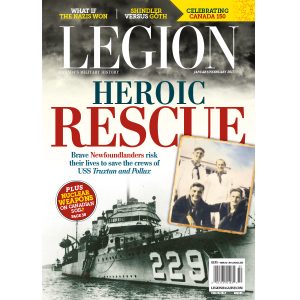