The July/August issue of Legion Magazine is now available!

War inside war: The aftermath of the Second World War

A tale of two PoWs: Spitfire pilot and U-boat captain

Canada and the U.S. sign the first defence agreement

The terror of mustard gas at Hill 70

Should Canada’s military be restructured?

Aircraft carrier made of ice

The 1907 collapse of a Quebec bridge

Be the first to review “July/August 2020 issue” 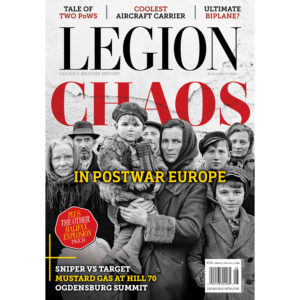