The July/August 2022 issue of Legion Magazine is out today! Look for it on newsstands or check your mailbox if you subscribe already.

Some were heroines, some were victims, but most women simply endured and survived the War of 1812

“TO THE MEN OF DIEPPE

Recent sexual misconduct scandals in the Canadian Armed Forces have been a catalyst for change. But will it go far enough—and last?

As the Second World War wound down, Ottawa assumed wartime working women would return to homemaking—the women had other ideas

Did the Dieppe Raid provide the Allies with lessons critical to D-Day’s success?

The ties that bind

The Acadian expulsion (around Aug. 10 and beyond)

Be the first to review “July/August 2022 issue” 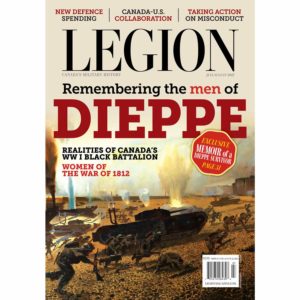