SUMMER’S BLOOM: A Tribute To The Remembrance Poppy, Featuring Planting Tips From Renowned Canadian Gardener Mark Cullen
Each year millions of people turn to the single poppy as the most easily identifiable expression of remembrance and sacrifice. We see it every time we hear John McCrae’s famous poem or think about a loved one lost or wounded by war. It is all at once an emblem of gratitude, hope and perseverance, and its beauty can fill us with silent resolve. Legion Magazine commemorates the Flower of Remembrance with a special section, including expert advice from renowned gardener Mark Cullen.

Comes with a free pack of Poppy Seeds!

BEYOND TOP SECRET: Undercover With Canadian Special Operations Forces
The Jamaican soldiers that clambered aboard a hijacked Canadian jet at Montego Bay last April owe much of their training to a Canadian Forces unit discreetly deployed in the Caribbean country. Less than a month after the hijacking, Legion Magazine Staff Writer Adam Day travelled to Jamaica where he entered the top-secret world of special operations training provided by the Canadian Special Operations Regiment, a relatively new unit based at Petawawa, Ont.

EIGHT GREAT CANADIAN MEDICAL BREAKTHROUGHS
From the development of Pablum to the world-changing discovery of insulin, to safer heart surgery, stem cell research and gene mutation, Canada can be very proud of the medical breakthroughs made by its doctors and researchers. Their work has saved lives and affected the health of hundreds of millions of people around the world. Staff Writer Sharon Adams takes readers on a tour of eight great groundbreaking achievements.

Be the first to review “July/August 2009 Issue” 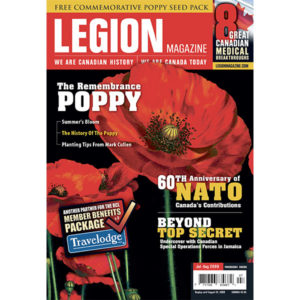