“THEY DIDN’T HAVE TO DIE!”
Seventy years ago next month, some 5,000 Canadian soldiers crossed the English Channel en route to Dieppe, France. Many of them never got ashore; falling victim in their landing crafts or in the salty waves to German machine-gun and artillery fire. Others died on the rocky beaches or were taken prisoner. Renowned historian J.L. Granatstein revisits Dieppe concluding that the horrific Aug. 19, 1942, raid was—“unquestionably—a bungled operation that left families in Canada in grief and shock.”

1812 VICTORY AND TRAGEDY
With War of 1812 commemorations in full swing, top historian Donald E. Graves takes readers through the opening battles and provides a close-up look at the sudden death of General Sir Isaac Brock at Queenston Heights.

VIMY: THE ANNIVERSARY
It’s been 95 years since the Canadian Corps accomplished what no other Allied army could do—take Vimy Ridge. Fresh back from a visit to the famous landmark, Staff Writer Sharon Adams explains how the story of Vimy is being passed down through generations.

HARD KNOCKS IN THE ARCTIC
Courage is not the most necessary quality to have while bumping across some
1,500 kilometres of mountainous Arctic terrain. Staff Writer Adam Day—who at one point found himself flying off his snowmobile—says it was resilience that got him through Operation Nunalivut, the Canadian Forces’s annual sovereignty patrol.

Also in the July/August Legion Magazine

Be the first to review “July/August 2012 Issue” 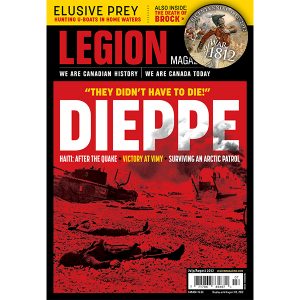