FLASHPOINT KOREA
Historian and military affairs writer David J. Bercuson provides a retrospective and current look at the long-standing tensions on the Korean peninsula, and events leading up to the historic signing of the Korea Armistice Agreement.

COLLATERAL DAMAGE: Families In The Wake Of War
The damaging consequences of operational stress injuries—nightmares, flashbacks, addiction, depression, violence—has rocked the world of hundreds, if not thousands of Canadian military families. Staff Writer Sharon Adams travelled across the country and was welcomed into the homes of veterans to see and feel first-hand what it is like for families coping with a loved one suffering from an OSI. It is a must-read story for anyone who cares about the fallout of war.

TOP GUN: CANADA’S CHIEF OF DEFENCE STAFF
General Tom Lawson is a fighter pilot who—as Chief of Defence Staff— has risen to the top of Canada’s Forces. Staff Writer Adam Day tells us about our top gun, his mission and areas of expertise.

The re-enactment of a historic War of 1812 march
A prominent Canadian family’s wartime legacy
Pocket of Destruction: The bloody fight to close the Falaise Gap in Normandy

Be the first to review “July/August 2013 Issue” 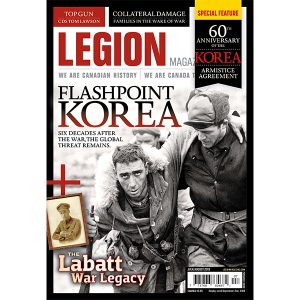