CHARGE OF THE CAVALRY
100 years ago, mounted Canadian soldiers made an ill-fated charge at enemy forces in Moreuil Wood, France. It was one of the last such charge Canadian troops would attempt

TRENCH LIFE
What troops wore, said and ate in the front lines of the First World War

MILITARY HEALTH MATTERS
The price of sexual harassment in the military

EYE ON DEFENCE
Snuffing out unacceptable behaviour in the ranks’

FACE TO FACE
Should Field Marshal Bernard Montgomery have tried to clear the Scheldt Estuary in 1944?

Be the first to review “March/April 2018 issue” 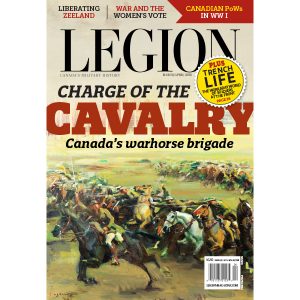