LIFE ON THE LINE
What they wore, said and ate at the front in the Second World War

VINTAGE WARBIRDS
Ah, how they sing and soar among the clouds

FACE TO FACE
Is the Spitfire the most elegant aircraft ever built?

SONGS FROM THE PATRIOTIC HEART
With pianos common in middle-class households, original sheet music was in high demand during the Great War

MILITARY HEALTH MATTERS
The toll on a sniper’s brain

EYE ON DEFENCE
The golden days of peacekeeping have not returned

HUMOUR HUNT
Why you shouldn’t steal the padre’s whisky

Be the first to review “March/April 2019 issue” 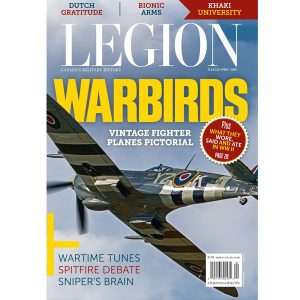