Our March/April 2020 back issue is now available!

HISTORY REPEATS
The chronicles of war are replete with repetition. One might be forgiven if the visual record is mistaken for a critical case of déjà vu

WHAT WOULD YOU DO?
Sometimes the hardest decision and the right decision are the same thing

WAR COMES TO SYDNEY HARBOUR
Second only to Halifax, Sydney became a major port as Canada scrambled to come to Britain’s aid

FACE TO FACE
Was it acceptable for General Vokes to order the razing of Friesoythe, Germany?

CANADA AND THE NEW COLD WAR
The Middle East and us

HUMOUR HUNT
The pigeons of war

HEROES AND VILLAINS
Sergei Skripal and the GRU

Be the first to review “March/April 2020 issue” 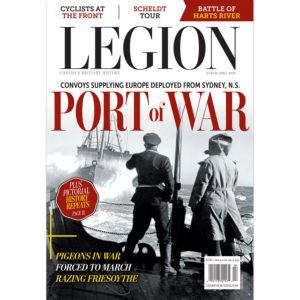