The March/April 2022 issue of Legion Magazine is out today!

Look for it on newsstands or check your mailbox if you subscribe already.

A GREAT VICTORY
Planned and executed with precision, the attack on Vimy Ridge redefined the Canadian Corps as an elite formation

FLIGHT OF THE PATHFINDERS
Crack teams of navigators and pilots marked targets from the air, in the dark and under fire

SAVIOUR OF CEYLON
Patrolling over the Indian Ocean, pilot Leonard Birchall and his aircrew spotted an approaching Japanese fleet

DANGER CLOSE
Wounded by a rocket-propelled grenade, Private Jess Larochelle fought off Taliban attackers at a strongpoint near Pashmul, Afghanistan

MILITARY HEALTH MATTERS
Medical care in the wars of the future

EYE ON DEFENCE
Down to two

FACE TO FACE
Does the CAF’s current dress code undermine inclusion and diversity?

Be the first to review “March/April 2022 issue” 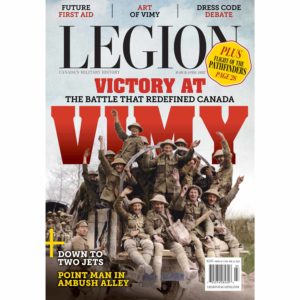