Assignment Afghanistan: Kill Town Salavat
Tired of constant harassment and threat from insurgents, a platoon of the Royal Canadian Regiment sets out on a patrol knowing that it is an invitation for an ambush. This time they hope to turn the tables on the enemy, with snipers hidden high in the hills. Staff Writer Adam Day gives a first-hand account of one day’s deadly encounter.

Bad To The Bone – TANKS
They are big, loud and deadly, but tanks have been an essential part of our military arsenal since they were introduced in 1916. Legion Magazine takes a look at 13 of the beasts that have served the Canadian Army well.

Be the first to review “March/April 2011 Issue” 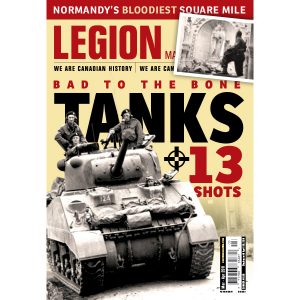