Legion Magazine reveals the results of a national public opinion poll and a national readership poll. The results will surprise you. The polls are part of a 20-page Veterans Benefits Guide that takes the reader through the array of benefits available to disabled veterans and provides a step by step overview of the application process. The guide includes a history of veterans benefits in Canada and lists the latest pension and award rates under both the Pension Act and the New Veterans Charter.

Orange Heroes From The Sky
A plane crashes in the Yukon, a boat starts taking on water on the North Atlantic, a father and son get stranded on an ice floe in the Arctic or fire traps a man on a construction crane 43 metres above Kingston, Ont.—all these would be certain death situations if it weren’t for the men in orange, Canada’s elite Search and Rescue Technicians. Staff Writer Adam Day looks at the work performed by Canada’s SAR Techs and joins them on gruelling training exercises over the frigid North Atlantic.

Victory Gardens: A retrospective on how Canadians took to their gardens during the Second World War to do their part on the home front.

Normandy Tour: Thinking of going to Europe to visit the sites where Canadians fought during the Second World War? Historian Terry Copp shows you around Falaise in France.

Be the first to review “March/April 2014 Issue” 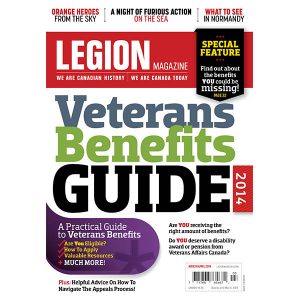