HOW WELL ARE VETERANS SERVED?
In one single issue of Legion Magazine, you’ll find everything you need to know about disability awards, pensions and benefits.

Following up on the success of last year’s Veterans Benefits Guide, this year’s guide will include the latest rates for 2015 and helpful hints on how to fill out first applications. We’ll also include the latest on veterans’ educational programs and a look at the benefits available to members of the RCMP. In addition, the 2015 Veterans Benefits Guide will feature the results of our readership poll on the quality of service from Veterans Affairs Canada.

Should the victory at Vimy Ridge hold the place it does in the annals of the Canadian Corps? That’s the big question we ask in our popular Face-To-Face series. The series, which explores controversial issues related to Canadian military history, also invites readers to weigh in on the debate.

On Board Ship: Join us for part 2 of Adam Day’s experience on HMCS Toronto, as part of Operation Reassurance.

Canadian Military History In Perspective: Top Canadian historians Terry Copp, Marc Milner and Hugh A. Halliday return with their perspectives on historic moments in the army, navy and air force.

Be the first to review “March/April 2015 Issue” 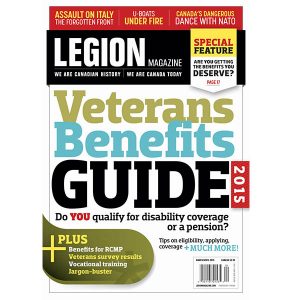