BATTLEFIELD DOCTOR
My great-great-grandfather was a surgeon who treated soldiers in the Battle of Ridgeway in 1866
ABUSED PRISONERS AND GREAT ESCAPEES
Canadian soldiers captured in Europe and Asia had little protection from brutality, murder and starvation
NOT TOO OLD TO SERVE
Veterans of the First World War guarded prisoners in the Second World War
STOPPING THE PANZERS
Canada’s role following D-Day was vital to the success of Operation Overlord
INTO ICY WATERS
Fifty years ago, the Ottawa River claimed the lives of seven paratroopers on a routine jump
MILITARY HEALTH MATTERS
Medical aid in the deep freeze
FRONT LINES
Canada’s Victoria Cross has yet to be awarded
EYE ON DEFENCE
Preparing for a nuclear attack
FACE TO FACE
Does Canada’s new peacekeeping policy make sense?
CANADA AND THE NEW COLD WAR
The price of the peace dividend
HUMOUR HUNT
Reading at the Legion
HEROES AND VILLAINS
Alfred Booker and John O’Neill
ARTIFACTS
Tank piercer
O CANADA
The short heroic life of Buzz Beurling 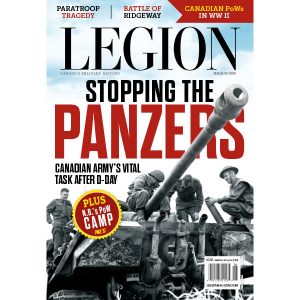