Our May/June 2020 back issue is now available!

SURVIVORS IN TURMOIL
Despite waves of celebration in Allied countries, millions on both sides faced dark and uncertain futures as the Second World War in Europe lurched to an end

VOICES FROM WAR’S END
As the Second World War in Europe drew to a close, the emotions of Canadian men and women in uniform were as varied as the circumstances of their service

AFTER DUNKIRK
Amid the chaotic evacuation in 1940, Canadians helped minimize the losses

THE OVERZEALOUS SKIPPER
When a captain ordered his ship into a choppy Bay of Fundy not “fit for harbour craft,” tragedy ensued

EYE ON DEFENCE
The need to modernize Norad

FACE TO FACE
Was home-defence conscription necessary in 1940?

CANADA AND THE NEW COLD WAR
The navy’s problems

ARTIFACTS
A new coat for Sussie 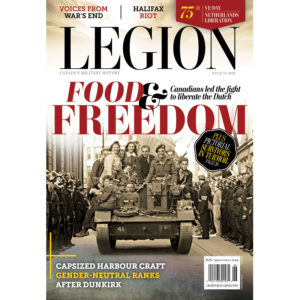