The May/June 2021 issue of Legion Magazine is out today! Look for it on newsstands or check your mailbox if you subscribe already.

The first Canadian-planned attack of the war was at Mont Sorrel, Belgium, in June 1916

On a thankless mission to protect citizens and keep warring factions apart, ingenuity and improvisation were the Canadian way

MEDICAL ADVANCES BEHIND THE LINE, PART 2

While Allied troops were fighting to secure the Normandy beachhead on June 9, 1944, Canadian air and naval forces helped destroy what was left of the German surface fleet 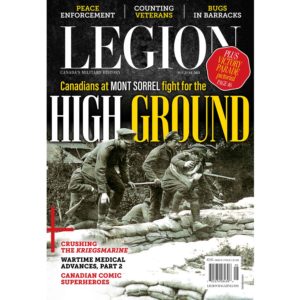