The May/June 2022 issue of Legion Magazine is out today! Look for it on newsstands or check your mailbox if you subscribe already.

Feted with parades and banquets, flowers and wine, the Canadian liberation of the Netherlands was a joyous time—though not far from the shadow of war

“WE ARE GRATEFUL TO THEM, BUT LET THEM GO HOME.”

BOLTING FOR THE BALTIC

When domestic emergencies strike—such as the November 2021 B.C. floods—the Canadian military often comes to the rescue

Canada’s military faced its first modern mission in response to a domestic natural disaster during the 1948 once-in-a-century flood in southern B.C.

Inuit eyes on the North

Should Canada have settled its civil suit with Omar Khadr? 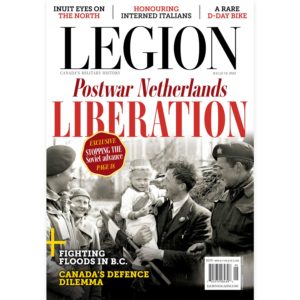