CANADA’S MOST RENOWNED MILITARY LEADERS
Canada distinguished itself in the First World War and has gone on to earn the respect of its allies ever since. Legion Magazine, with the help of some of Canada’s most respected historians, picks 25 leaders who have helped create Canada’s fighting forces.

PLUCKED FROM THE SEA
From the early days of manned flight to the end of the Second World War, air and sea rescue has saved thousands of lives. Canadian air force personnel have had a pivotal role in plucking air crews from the world’s oceans, often done while under enemy fire. Historian Hugh A. Halliday tracks their historic involvement and points to the technological changes that advanced this dangerous work.

DOMINION EXECUTIVE COUNCIL TAKES ACTION
With a federal election looming last February, Dominion Executive Council authorized a letter-writing campaign to get MPs to pass legislation improving the New Veterans Charter. The decision to take action was among several items discussed during DEC’s Feb. 26-27 meeting in Ottawa, including an update on the Legion’s Focus on the Future Committee. 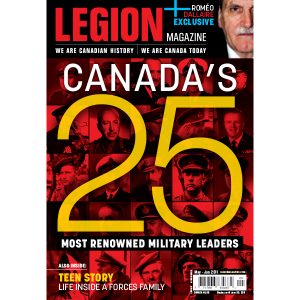