War Declared!
On June 18, 1812, United States President James Madison declared war on Britain and its colonies in North America. In keeping with the war’s bicentennial, historian Donald E. Graves gives a detailed account of the tensions, ambitions and behind-the-scenes manoeuvres leading to war.

1812 Journal: Then & Now
Legion Magazine begins a new series commemorating events during the War of 1812, which lasted from June 1812 until February 1815. Each article will be in two parts covering the same two-month time frame as the issue of the magazine. The “Then” portion describes events 200 years ago while the “Now” portion highlights exciting memorial, battlefields, fortifications and museum exhibits which can be visited today.

Endgame in Kabul: Training The Afghan Army
The NATO coalition in Afghanistan expects to have trained a security force of some 300,000 by the time it pulls out in 2014. Staff Writer Adam Day looks at Canada’s role in training the army and its shaky prospects for success.

Also in the May/June Legion Magazine 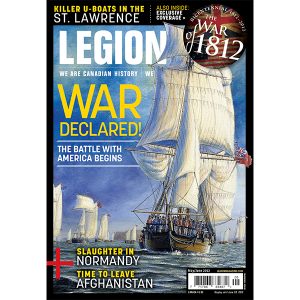