ACCESS GAINED-ACCESS DENIED
The lines between what should be regarded as private versus public information are lot more difficult to discern these days. While there are a myriad of hot issues related to the protection of privacy, there is growing concern about how much access the public has to government information through Access to Information requests. News Editor Tom MacGregor looks into the roles of Canada’s privacy and information commissioners, and why Canadians should care about who knows what.

THE STORY OF AN ELITE CANADIAN SOLDIER AND THE TERRIBLE AFTERMATH OF WAR
A story by Staff Writer Adam Day on an elite Canadian soldier who succumbed to his injuries from post-traumatic stress disorder points to why a lot more needs to be done to prevent such tragedies.

THE SOLDIER’S LIFE: BAD FOOD, VICIOUS BATTLES AND BRUTAL SURGERIES
They were tough men and they led hard lives. They were the common soldiers— the British and Canadian regulars of the War of 1812—and they did most of the fighting and dying. Renowned historian Donald E. Graves describes what they faced, including the roar of the cannon and horrific battlefield surgeries.

EYES ON THE SKIES
They were known as the “plane spotters” and while their volunteer work has largely been forgotten, it was not unusual to spot them during the Second World War. Contributor Graham Chandler provides a retrospective on the men and women who signed on to report strange aircraft—and ship—sightings during the war. 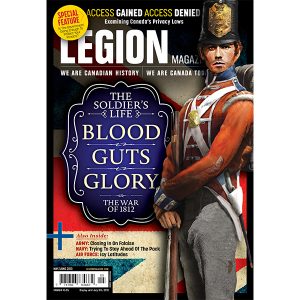