The German battleship Bismarck was a formidable opponent for Britain’s overextended navy fleet in the Second World War. The 50,000-tonne ship was brand new and equipped with the latest in firepower. It was sure to wreak havoc on the convoys bringing supplies and men that were a lifeline for Britain during the war. In its first foray it encountered Britain’s aging Hood and hit it with a 15-inch shell, detonating her aft magazine and causing a catastrophic explosion. However, Bismarck was damaged in the encounter, setting off a chase to destroy the enemy’s prized battleship before it could reach a safe port.

The warrior minister
Defence Minister Harjit Sajjan talks to Legion Magazine about Russian aggression, why fighting ISIL is not like fighting the Taliban and a newcomer’s life in politics

Chemistry experiments
Under strict secrecy, Canadian soldiers were used in testing of chemical and biological weapons in the Second World War

Bethune and Franco
What brought a brilliant Canadian doctor to cross paths with the man who would become Spain’s ruthless dictator? 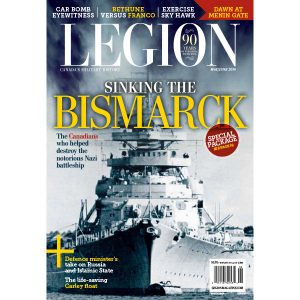