Canada’s first foreign war
Fighting in the Battle of Paardeberg in South Africa in February 1900, Canadian troops won their first major engagement in an overseas war.

A quiet victory in the gulf
Canadian air power was the key to shutting down the U-boat assault in the Gulf of St. Lawrence in 1942.

Hush-hush heroes, part 2
Canada’s Second World War agents in Asia defied the risk of imprisonment, torture and death in aid of the Allied cause.

Face to Face
Was it right for Canada to send troops to the South African War?

Heroes and Villains
Montgomery and Rommel’s showdown in the Egyptian desert.

GNATs versus CATs
When Germany introduced acoustic-homing torpedoes, Canada responded with noisemakers that lured them off-target. 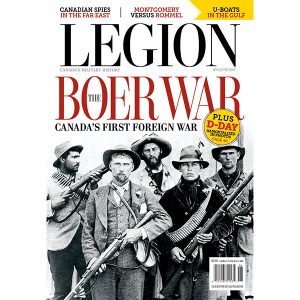