THE WOUNDED
These Canadian soldiers wounded in Afghanistan returned home to face the fight of their lives
THE CINDERELLA CAMPAIGN
Taking back the French Channel ports was critical to the success of the Allies’ Operation Market Garden in 1944
THEIR NAMES LIVE ON
Pilgrims walk the grounds where so many Canadians fought and fell in two world wars
THE RELUCTANT DEFENCE OF THE WEST COAST
After joining Confederation, British Columbians tried to raise a defensive military unit, while Ottawa’s attention focused elsewhere
MILITARY HEALTH MATTERS
Using nanotechnology to heal wounds
FRONT LINES
The soulless gaze of haters
EYE ON DEFENCE
Is it time for Canada to get anti-ballistic missiles?
ARTIFACTS
Danger UXB: an unexploded bomb is unearthed by construction workers in Quebec City
O CANADA
The last PoW: RCAF pilot Andy MacKenzie spent two years in a Chinese prison

Be the first to review “November/December 2017 Issue” 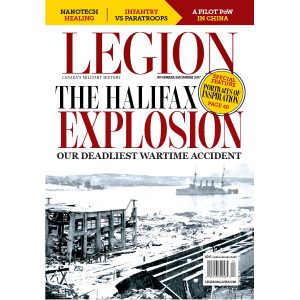