Our November/December 2020 issue is now available!

The November/December 2020 issue of Legion Magazine is out today! Look for it on newsstands or check your mailbox if you subscribe already.

SHIPPING OUT
No matter what era, the moment when a soldier ships out is laden with bittersweet emotion

TO WAR, AGAIN
The 1950 invasion by North Korea drew world-war allies, including Canada, into another fray

GUNNERS ON ICE
As the war on the Western Front ended, the Allies took on the Red Army on its own turf

MILITARY HEALTH MATTERS
A military response to the pandemic

FRONT LINES
Surveying knowledge of the Battle of Britain

EYE ON DEFENCE
Time to think about new submarines

FACE TO FACE
Was All Quiet on the Western Front (1930) the most important war film ever made?

CANADA AND THE NEW COLD WAR
Canada and the United Nations

Be the first to review “November/December 2020 issue” 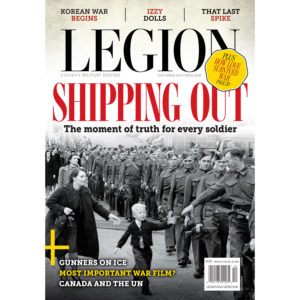