Our November/December 2021 issue is now available!

The November/December 2021 issue of Legion Magazine is now available in our online store!

Over the past century, the poppy has become a universal symbol of remembrance

Japan’s attack on Hong Kong was the first fight of the war for Canadian soldiers. It didn’t end well

Delayed by a year, Legion delegates finally met in a virtual convention hall and found strength in unity

In 1951, Ottawa was making plans for peacetime compulsory military service

The Faces to Graves project is collecting stories and photographs of nearly 6,000 Canadian soldiers buried in Dutch cemeteries

A CENTURY OF DISARMAMENT

Was Canada’s decision to reinforce Hong Kong a mistake?

Be the first to review “November/December 2021 issue” 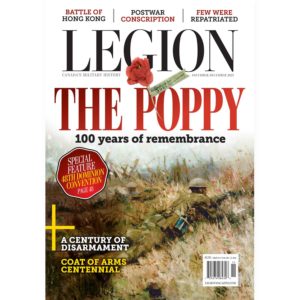