The November/December 2022 issue of Legion Magazine is out today! Look for it on newsstands or check your mailbox if you subscribe already.

A LIFETIME OF SERVICE

How the first Battle of Cambrai changed warfare forever

How Verdun, Que., formed a special bond with its own warship

Earlier this year, Indigenous spiritual symbols were officially recognized to adorn headstones in the National Military Cemetery of the Canadian Armed Forces

Should Canada institute a period of mandatory military service?

NATO and the neutrals

Nichola Goddard and the Taliban

Be the first to review “November/December 2022 issue” 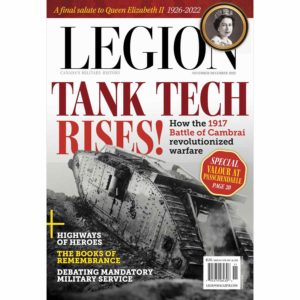