CANADA AND THE VICTORIA CROSS
In keeping with remembrance, we present Part 1 of a two-part Victoria Cross poster series that highlights the valour of nearly 100 Canadian VCs. Created in 1856 by Queen Victoria, the VC is the most esteemed of all military honours. Our poster features portraits of each recipient, plus brief accounts of their deeds—from the Battle of Balaclava in 1854 to the Second World War.

HONG KONG: THE INSIDE STORY OF CANADA’S DOOMED GARRISON
Seventy years ago, on Dec. 7, 1941, Imperial Japan began its war against the West, attacking Pearl Harbour, Malaya and moving against Hong Kong. In the Crown colony’s garrison were almost 2,000 Canadian soldiers. Historian J.L. Granatstein explains how for the next 18 days these soldiers fought for their lives, and how many died or suffered years of brutality at the hands of their captives.

THE SPECIALISTS: INSIDE THE MIND OF SNIPERS
Staff Writer Adam Day takes readers onto the range at the 15th annual Canadian International Sniper Concentration. He describes the challenge and precision associated with accurately claiming a target, some moving and some more than a thousand metres away.

INCLUDES PART ONE OF OUR VICTORIA CROSS POSTER SERIES!

Be the first to review “November/December 2011 Issue” 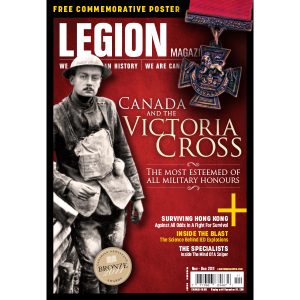