12 Military Events That Shaped Canada
Noted historian J.L. Granatstein picks 12 events in Canada’s military history since Confederation that helped make Canada the nation it is today. His selections range from the Northwest Rebellion of 1885, through to the liberation of the Netherlands in the Second World War to our recent involvement in Kandahar province, Afghanistan. The issue also comes with a free 21” x 29” poster marking the events.

Riding On: Staff Writer Adam Day travels the battlefields of Northwest Europe on bicycle with a group of Canadian Forces veterans struggling with their stress injuries.

The War Within: Staff Writer Sharon Adams begins a two-part look at veterans with stress injuries trying to make the difficult transition back into civilian life and some of the programs which are helping.

Also in the November/December issue of Legion Magazine

The Men Who Sank The Tirpitz
A look at the air battle that claimed Germany’s prize battleship.

Women In The Forces
Legion Magazine celebrates the 70th anniversary of the Women’s Royal Canadian Naval Service and looks at efforts to recruit women in all branches of the forces during the Second World War.

Be the first to review “November/December 2012 Issue” 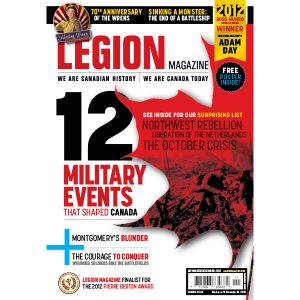