THE LONG SHOCK OF WAR
The reverberations of war continue long after the last shell or bullet is fired. They roll outward—like waves from a blast—through one generation to the next. Legion Magazine Editor Dan Black describes what it was like to retrace the life of his grandfather who served and was terribly wounded in the First World War. It is a story that is emblematic of the way men and women move on from war, and how all of us are touched by their experience.

THE KOREAN MIRACLE
Sixty years after the Korea Armistice Agreement was signed, the Korean Peninsula remains a place of conflict and tension. News Editor Tom MacGregor describes his recent journey to South Korea where Canadian veterans commemorated the service and sacrifice of comrades lost in a war that ended with an uneasy ceasefire.

THE SEARCH FOR HENRY CLEARY: An airman’s logbook sheds light on his last days in the Second World War.

LOST IN AFGHANISTAN, A WIDOW’S TRIBUTE: Corporal Mike Starker was the 83rd Canadian soldier to die in Afghanistan. His widow Nicole explains how she has carried on with her memories and the help of Canada’s closely knit military family.

VOLUNTEERS FOR VICTORY: How women mobilized the wartime volunteer effort.

Be the first to review “November/December 2013 Issue” 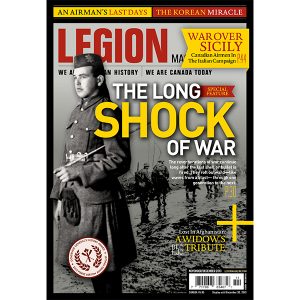