Marching Off To War
Boots disintegrated in the mud, rifles jammed and there weren’t enough trucks and artillery shells. Add to that a backdrop of mistrust. Still, Canada was quick to march off to war in the summer of 1914. Historian Andrew Iarocci sets the stage with a comprehensive retrospective.

Julian Fantino
Veterans Affairs Minister Julian Fantino has been busy during his time with the veterans’ portfolio. He has made many close connections to veterans, but has also been heavily criticized by those who are dissatisfied with veterans’ services. Staff Writer Sharon Adams provides a profile.

The Veterans Revolt
Staff Writer Adam Day lays out the facts on what has been a year of rising anger and disappointment among Canada’s veterans.

FREE First World War Map / Calendar Poster
Legion Magazine marks the centenary of the First World War with a colour map/calendar poster highlighting major Canadian battlefields and historic events. This commemorative insert is aimed at all ages and all levels of interest in the war.

Far From Home
How a British couple has embarked on an epic journey to document the lost or forgotten graves of Canadian soldiers who died in the United Kingdom during the First World War.

The Van Doos
As the Royal 22nd Regiment marks its 100th anniversary, we provide a retrospective on the storied Canadian infantry battalion.

Is It Wrong To Sell Military Medals?
Military medals are bought and sold regularly in Canada and elsewhere and there are no rules against it. Is this practice wrong? Two historians take opposite views in our popular Face-To-Face series.

Be the first to review “November/December 2014 Issue” 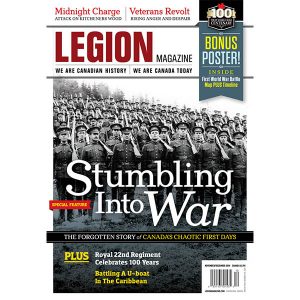