MESSAGES TO THE FALLEN

Inspired by John McCrae’s “In Flanders Fields”—composed a century ago—a collection of new essays by prominent Canadian authors inspires us to remember. “Messages to the living, messages to the dead,” by acclaimed writer Frances Itani, leads off the November/December 2015 issue’s special remembrance package, and is followed by “Two wars in two weeks,” tracing the travels of pilgrims from across Canada who visited battlefields, cemeteries and memorials in France, Belgium and the Netherlands in July.

Also in the issue:

Be the first to review “November/December 2015 Issue” 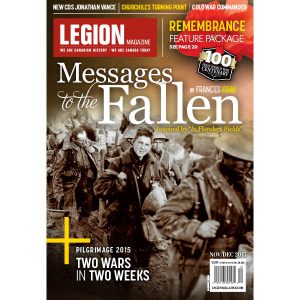