“War shaped Canada,” says renowned historian J.L. Granatstein. To see how , the historian takes readers through  five significant battles fought by five different generations of soldiers. We’ll look at Quebec in 1759, Michilimackinac and Detroit during the War of 1812, the Canal du Nord at the end of the First World War, the Battle of the Scheldt in the Second World War and the fighting in Kandahar and Panjwaii still fresh in our memories.

A widow marks the 10th anniversary of the death of her peacekeeper husband in the battle between Israel and Hezbollah of Lebanon. He personal pilgrimage takes her along with a handful diplomats into the still intensely guarded border area.

The home front could use a morale boost in the spring of 1942 with more and more men needed for the war effort abroad and rationing tightening up at home. Who would have expected that the Toronto Maple Leafs and the NHL would provide that boost?

Should Remembrance Day be a statutory holiday? Two historians take opposite sides.

Osama bin Laden remained in hiding for years after the 2001 attacks on New York and Washington but U.S. President Barack Obama made hunting down bin Laden his administration’s top mission in the war on terror.

Be the first to review “November/December 2016 Issue” 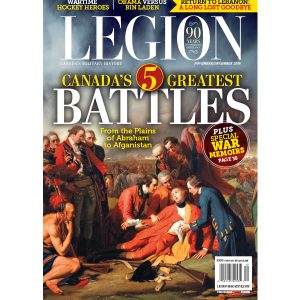