SKU: N/A Categories: Posters, Specialty Items Tags: cloth hall, poster, ypres
The Second Battle of Ypres began in April 1915, the only major German attack that year on the Western Front. Rather than capture the town of Ypres, Belgium, the Germans decided to destroy it by artillery bombardment. The civilian population was evacuated and the Cloth Hall together with St Martin’s Cathedral suffered heavy German shelling. A compelling poster for any Legion Branch commemorating the Second Battle of Ypres.
Horizontal Version 2: View of Cloth Hall ruins. 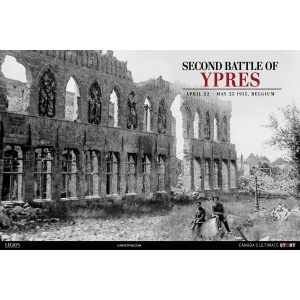