Our September/October 2018 issue issue back issue is now available!

WITNESS TO SLAUGHTER
The Medak Pocket in Croatia was the place where, for Canada, peacekeeping went to die

WAR AND THE SPANISH FLU
As the First World War drew to a close, the world was hit by the greatest pandemic since the bubonic plague

THE RACE TO CAMBRAI
In September 1918, German-occupied Cambrai was on the verge of falling. But could the Canadians reach the town in time to save it?

OUR FIRST AIR FORCE
Formed, disbanded and resurrected, 401 Squadron has been at the heart of Canada’s air defences for a century

OUR AMERICAN AIRMEN
As Canada rushed to find instructors and aircrew for the British Commonwealth Air Training Plan, many Americans flocked north

EYE ON DEFENCE
The thinning of the Canadian Armed Forces

FACE TO FACE
Should robots replace soldiers in war?

CANADA AND THE NEW COLD WAR
Yugoslavia breaks up

HUMOUR HUNT
The dispute that saved the Welland Canal

Be the first to review “September/October 2018 issue” 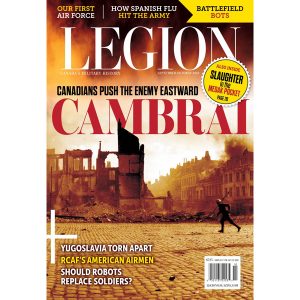