Our September/October 2020 issue is now available!

The September/October 2020 issue of Legion Magazine is now available in our online store!

BOOTS ON THE STREETS
In response to the October Crisis in 1970, soldiers started patrolling in Ottawa, Montreal and Quebec City

MILITARY HEALTH MATTERS
Progress in the fight against malaria

FACE TO FACE
Should the James Cross kidnappers have been granted safe passage to Cuba?

CANADA AND THE NEW COLD WAR
Defence in a pandemic

HEROES AND VILLAINS
Vickers and Barrett versus Zehaf-Bibeau

Be the first to review “September/October 2020 issue” 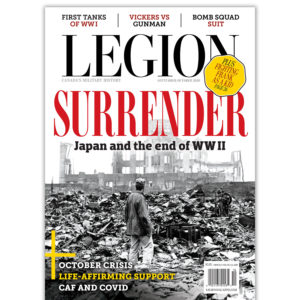