The September/October 2021 issue of Legion Magazine is out today! Look for it on newsstands or check your mailbox if you subscribe already.

The 9/11 attack triggered an international response, and Canada was quick to join the fight

As soon as war was declared in 1914, thousands of volunteers descended on a tent city for some very basic training

THE MAN WHO SKIPPED A LINE

He signed in the wrong place, but representing Canada at Japan’s surrender was still a career highlight for soldier-diplomat Lawrence Cosgrave

Should Canada boost its military presence in the Arctic?

Afghanistan goes to the Taliban

The ducks of war

Be the first to review “September/October 2021 issue” 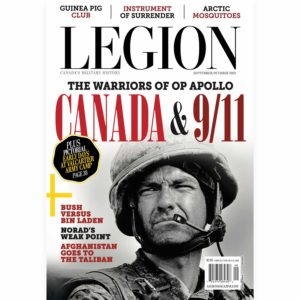