OCTOBER CRISIS REVISITED
It has been 40 years since The October Crisis shook Canada. Contributor D’Arcy Jenish revisits the events, including the kidnappings—and the murder of a Quebec cabinet minister—that stunned an entire nation.

A ROYAL REVIEW
Celebrations for the Canadian navy’s 100th anniversary reached a royal pinnacle in late June when Her Majesty the Queen arrived in Halifax for the International Fleet Review. News editor Tom MacGregor was there to witness the Queen and His Royal Highness the Duke of Edinburgh review 28 ships during the weeklong celebration.

AFGHANISTAN AND THE STRUGGLE FOR SALAVAT PART 4
Legion Magazine military affairs writer Adam Day serves up the fourth instalment of his series on a Canadian platoon’s mission to help win the hearts and minds of residents in the rugged and dusty village of Salavat, Afghanistan.

ON BOARD HMCS FREDERICTON
We present Part 3 of a series examining life on board a Canadian frigate during counter-terrorism operations in the Arabian Sea. The piece includes a look at what it takes to support a long deployment thousands of kilometres from home.

Be the first to review “September/October 2010 Issue” 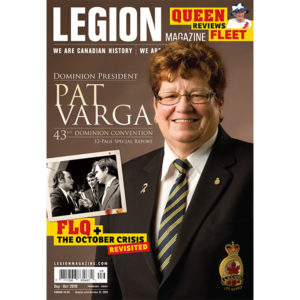