LEGION MAGAZINE FINALIST FOR PIERRE BERTON AWARD
For the first time since the inception of the Pierre Berton Award—Canada’s most prestigious history honour—a national magazine may be named as the winner. The nomination of Legion Magazine was announced in Winnipeg by Canada’s National History Society, a national charitable organization devoted to popularizing Canadian history. In keeping with that theme, the magazine’s September/October issue includes features ranging from the War of 1812 to the Cold War.

KILL THE MEN AND THE SHIP IS YOURS!
They were fast and bloody engagements and they had a huge impact on the War of 1812. Author and historian John Boileau examines the violent broadside battles along the eastern seaboard during the war. One of the bloodiest pitted the HMS Shannon against the USS Chesapeake.

THE GIFT OF AIR POWER
Church socials, school plays and hockey games were used to raise money for what became known as the Spitfire Fund. Started in 1940 by Canadian businessman Garfield Weston and supported by Canadians from all income brackets, including the publisher of the Montreal Star, the Spitfire Fund took off and helped win the war.

Also in the September/October issue of Legion Magazine

BEYOND CONVENTIONAL THINKING
A nationwide program to get homeless veterans off the streets; an achievement award for Canadian actor Paul Gross; the unveiling of an interactive Teachers’ Guide  are headlines from The Royal Canadian Legion national convention in Halifax.

THE MALTESE CONNECTION
The Mediterranean island of Malta and the Royal Commonwealth Ex-Services League (RCEL) share a symbolic connection to the Second World War. Jennifer Morse reports on how the RCEL continues to care for Commonwealth war veterans.

Be the first to review “September/October 2012 Issue” 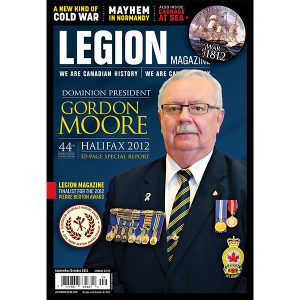