Pips off the port beam

I have spent many an evening in Grandpa’s home in Windsor, Ont., with him sitting in his recliner and me on the couch. Before too long a conversation would start up, with me asking about the war. What emerged were remarkable stories of a young sailor at sea far from home, back in the days of daily rum tots, torpedoed merchant ships and depth charge attacks. Thomas Joseph Simpson—Grandpa to me—served in the Royal Canadian Navy (RCN) during the Battle of the Atlantic, and his story, like that of thousands of others, is one of service, sacrifice and survival. Grandpa’s role, and his burden, more than 70 years later, has been to see that those who did not return are remembered as true heroes. “I’m no hero,” he says. “All the real heroes call the ocean their grave.” Read the rest of this touching personal memoir, and more, in the September/October 2015 issue of Legion Magazine.

Cracks in the system, part two: Broken faith
Soldiers accept the risk of death or injury, particularly when they’re in a combat zone. What is hard to accept though, and what they barely consider when in a combat zone, is what their life will be like if they return home wounded. They’d expect, at least, to be treated with care and respect. Canada’s system for compensating and caring for these veterans is imperfect; it has gaps, it may even be broken. And while everyone knows there is a problem—military leaders, politicians, bureaucrats, the public—the problem remains.

Bittersweet Celebration
The 70th anniversary of Liberation Day in the Netherlands.

Face To Face
Was Prime Minister Pierre Trudeau justified in invoking the War Measures Act during the
FLQ crisis of October 1970?

Be the first to review “September/October 2015 Issue” 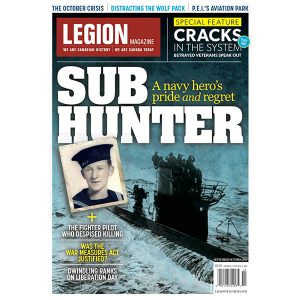